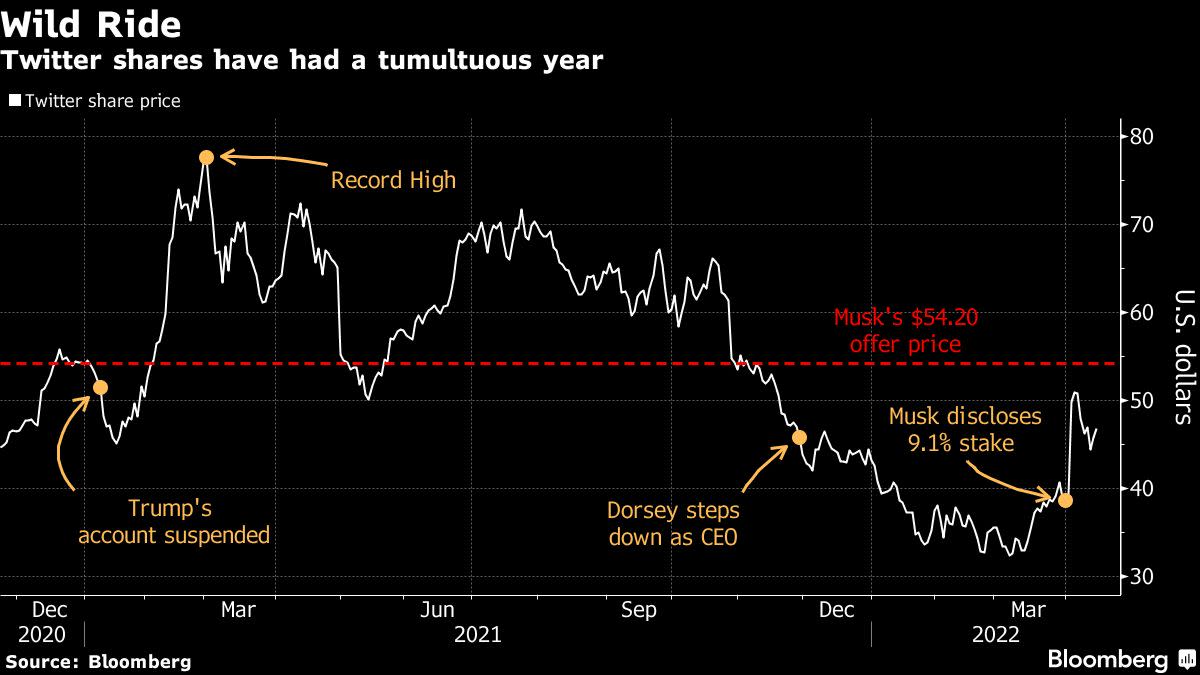 Most Read from Bloomberg

Retail investors piled into Twitter Inc. stock on Thursday, after the world’s richest person and head of Tesla Inc. roiled the financial world with an audacious bid to purchase the company for $43 billion. Musk later expressed doubt about whether the blockbuster deal will succeed, but that didn’t do much to deter non-professional traders.

Twitter was the most-purchased stock on Fidelity’s list of buy and sell orders for Thursday, with its ticker trending on Reddit’s WallStreetBets and Stocktwits. The stock saw 12,000 buy orders compared with about 7,400 sell orders. Tesla was in second place, at 8,000 buys and 3,700 sells.

Retail traders had already fueled record Twitter trading volume on April 4, the day Musk reported his 9% stake in the company. As of the end of trading Wednesday, they had pushed $423.9 million into the stock since the disclosure.

“Retail will follow Elon to the gates of hell and back,” said Nick Colas, co-founder of DataTrek Research. “He’s made them a huge amount of money over the years.”

Institutional investors — who would be the key to success for any Musk offer taken directly to shareholders — reacted less favorably to the bid. Twitter’s stock fell 1.7% Thursday to $45.08, well below his $54.20 proposal.

But day traders and Musk fans have heightened interest in the billionaire’s movements, mostly because they’ve witnessed his influence before, and could potentially make Twitter into a so-called meme stock. Musk has a history of moving markets via the platform, where he has more than 80 million followers and is one of its biggest personalities.

During the height of the meme-stock trading frenzy in January 2021, Etsy Inc.’s value jumped by more than $2 billion after Musk said he “kinda” loved the company. On the same day, the one word “Gamestonk!!” helped send shares in GameStop Corp. up 92%.

“There is way more value to be unlocked and Elon believes the stock is worth way more than $54. I tend to agree,” Questembert said. “The changes that he wants to make to Twitter will be good for shareholders, so I trust that he will persist.”

Musk said at a TED event Thursday that he’s not sure he’ll “actually be able to acquire” the company, while noting that he has a Plan B for his offer. He indicated in a U.S. securities filing Thursday that $54.20 is his final price, saying “I am not playing the back-and-forth game.”

That could mean if Twitter’s board rejects his offer, he might consider going hostile, and ask shareholders directly if they want to accept his bid. But he would need to galvanize institutional holders along with the retail army. The $423.9 million added from retail traders since the disclosure of his stake, for instance, equals about 1.2% of Twitter’s current market value.

Musk asked in a Twitter poll after the market closed Thursday if the offer should be up to shareholders and not the board. As of 6 p.m. New York time, about 84% of respondents said yes.

At least one investor has been vocal. Saudi Prince Alwaleed bin Talal said he rejects Musk’s offer as not coming “close to the intrinsic value” of Twitter given its growth prospects. Musk responded by asking about the Saudi stake and views on freedom of speech principles.

And Twitter is arguably the meme-ish of all stocks. It’s where most of them are made.

The platform has became a mecca for retail investors, who have used it to source news, information and tips that inform their investment strategies. The community of traders interacting on Twitter has been coined “FinTwit,” and their collective power has often sent prices of certain stocks surging. It’s not uncommon for figures like Musk to directly engage with that community online.

One person less enthusiastic about Twitter is Cathie Wood, who sold 185,900 shares of the company from her Ark Next Generation Internet ETF after Musk took his stake in the social-media giant. She said she had concerns about “management distraction” when co-founder Jack Dorsey stepped down.

Andy Strachwsky, a retail investor in Florida, also has doubts about Twitter’s future. The 45-year-old retired commercial photographer sold his entire stake in the company — $30,000 worth — after Musk pulled out of plans to join the company’s board.

“The only reason I bought Twitter was because Elon bought into Twitter,” he said. “I said OK, I’ll make a couple bucks. But as soon as he said he declined the board I was like, he’s going to try to buy it all, but they’re never going to let that go through.”

Questembert, the trader who added to his stake Thursday, has already made big gains on Musk moves. He said he began buying Twitter shares last month because they were trading in the low $30, not far above the company’s 2013 initial public offering price. After news broke that Musk was joining the board, Questembert sold those 11,000 shares at more than $50 each.

“It was close to my birthday, so I told myself that’s my birthday present from Elon,” Questembert. “We all love Elon, he is a maverick. He is childish sometimes but he gets things done.”

Most Read from Bloomberg Businessweek