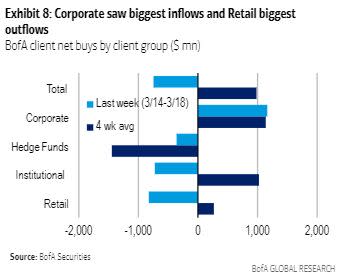 (Bloomberg) — In what looks increasingly like an uncharacteristic bout of bad timing, retail investors who hung tough during the selloff in January and February are now taking money off the table just as stocks are rallying.

Most Read from Bloomberg

Evidence of a retail pullback was visible in data from several Wall Street banks and the U.S. options clearing agency. Data from JPMorgan Chase & Co. showed their flows have slowed from a torrid pace earlier this year. Bank of America Corp.’s retail clients were net sellers of U.S. stocks for the first time this year.

Many factors may have driven the retreat. One that has been getting the attention of analysts of late is the need to pay off an outsize tax bill on massive capital gains. According to a February estimate from Morgan Stanley’s trading desk, at least $325 billion will be due at next month’s deadline, 75% higher from what was to be paid a year ago.

Of course, equities are not the sole source of that cash. Yet the pressure to meet tax obligations could mean waning demand from one key pillar of support in place since the market’s pandemic bottom two years ago. Indeed, data from JPMorgan showed broad daily retail flows this month are about 20% lower than this year’s average.

Whether appetite from the YOLO crowd will continue to subside is hard to tell. To some market watchers, their withdrawal follows a stretch of furious risk unwinding from the likes of hedge funds — a contrarian sign that sentiment may have reached a point where the last buyer is depleted and a floor can be established for the market.

“‘There’s no one left to sell’ is the logic behind the retail finally surrendering their optimism and becoming as glass-half-empty as the rest of the world has already been,” Lawrence Creatura, a fund manager at PRSPCTV Capital LLC, said in an interview. “So professional investors use that as a tell to indicate when capitulation has occurred.”

Day traders pulled back as stocks staged a strong comeback. The S&P 500 fell to within points of its 2022 lows at the start of last week before jumping in five of the next six sessions. Up 8% over the stretch, the index clawed back half its losses incurred during the previous two months. It slipped 0.9% as of 2:10 p.m. in New York.

Retail activity has become a focal point of Wall Street attention after many bored Americans flooded into stocks during the pandemic lockdowns, emboldened by zero trading commissions offered by online brokers. Their market influence, however, has diminished this year as a hawkish Federal Reserve and war in Ukraine jolted big-money managers into action.

Bank of America’s retail clients sold more than $800 million of shares last week after pouring in almost $8 billion since January as the market pulled back.

“Retail has been a more aggressive buyer of the dip year-to-date than any other time since the global financial crisis and dip-buying has been a successful strategy,” BofA strategist Jill Carey Hall said in an interview. “Retail is not a contrary indicator. We found that the weeks we’ve seen positive retail flows, those have positive correlation with subsequent market returns even more so than hedge fund flows do.”

There are also signs in the options market that retail interest is cooling. Once a big fan of using bullish options to chase equity gains and make quick money, day traders have seen their demand for calls dwindling. Last week, small-lot buying of call contracts made up the lowest portion of total call volume since March 2020, Options Clearing Corp. data compiled by Susquehanna International Group show.

While amateurs were exiting, hedge funds tracked by BofA reined in their selling. Their share disposals totaled less than $400 million last week, down from $2.4 billion from the previous week.

Meanwhile, hedge fund clients at Morgan Stanley and JPMorgan were tiptoeing back after frenetically slashing their equity exposure. Last week, they trimmed short positions against stocks while adding longs, separate data from their prime brokers show.

“Unfortunately, the retail client is often wrong and moving the opposite direction of institutional cash,” said Victoria Greene, founding partner and chief investment officer at G Squared Private Wealth. “Retail selling may be signaling we saw at least a short-term bottom and support in this turnaround.”

Most Read from Bloomberg Businessweek