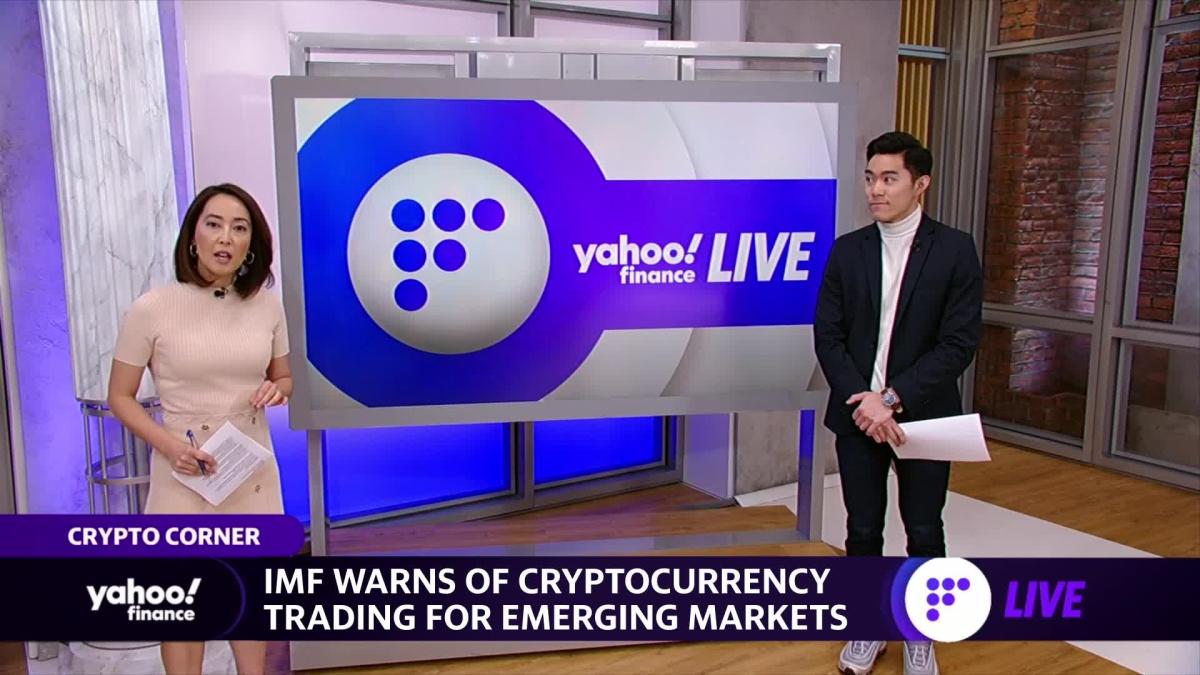 AKIKO FUJITA: Well, the International Monetary Fund is out with a new report on global financial stability revealing how crypto trading could affect the world’s economy. Yahoo Finance’s Jen Schonberger joins us with the very latest on that front. Jen, we just heard from the IMF earlier about the global economic outlook. What are they saying specifically about crypto?

JENNIFER SCHONBERGER: Good morning, Akiko. The IMF warning this morning in a brand new report on global financial stability that a spike in cryptocurrency trading in emerging markets could pose a risk to the global financial system. Now the IMF also saying that the war in Ukraine has revealed that there are risks to crypto payment systems as well.

The IMF saying in that report, quote, “Repercussions of the Russian invasion of Ukraine and ensuing sanctions continue to reverberate globally and will test the resilience of the financial system through various channels, including acceleration of cryptoization of emerging markets, direct and indirect exposures of banks and non-banks, and possible cyber-related events.”

Now we have seen an increase in the use of cryptocurrencies in emerging markets since the start of the pandemic. And the IMF has highlighted that trading volumes of crypto assets against some emerging market currencies have spiked since the West sanctioned Russia. Tether, of course, the largest stablecoin used to settle spot and derivative trades, has in particular seen a spike in trading volumes against emerging market currencies. That spike is particularly notable in Turkey, where exchange rate volatility has been high, and the overall use of crypto assets has gained traction over the past few years.

The IMF also warned that cryptocurrencies could be used to evade sanctions. US Treasury Secretary Janet Yellen has noted that as well, though she says that the Treasury Department has not seen any major evidence of crypto being used to evade those sanctions. Now, Akiko, the IMF recommends that policymakers come up with a global set of regulatory standards to govern digital assets to ensure to protect against these risks for the global financial system, noting that decentralized financial platforms, as well as fintech firms, need further oversight. Back to you.

BRIAN CHEUNG: Yahoo Finance’s Jennifer Schonberger, thanks so much. Let’s take a look at Bitcoin because there is a lot of movement happening in the crypto space. It’s trading above $41,000 right now. It was actually below 40,000 yesterday, a lot of movement in today.

But obviously, that’s because publicly traded crypto companies are facing greater losses than the actual digital assets, at least, is the observed trend as of late. You can see Coinbase up against Bitcoin right now, actually performing quite differently. So, you know, it’s not necessarily always the case that Bitcoin and Coinbase and all the other crypto adjacent stocks or assets are moving in lockstep, Akiko.

AKIKO FUJITA: Yeah, Coinbase one, Robinhood another one that we’re tracking as well. And you have to wonder how much of that is really about it moving in tandem with crypto, how much of it is about how those companies are performing on their balance sheet specifically. We’re also been watching some of the ETFs for– well, there’s Robinhood. It’s up today. But we’re also– we’ve also been watching some of the ETFs with exposure to Bitcoin because, remember, when these ETFs launched last year, it wasn’t necessarily about a direct investment on crypto.

BRIAN CHEUNG: People are loving that.

AKIKO FUJITA: And those who were critical would say, look, this isn’t about a direct investment in crypto itself. And that hasn’t necessarily fared well as well. You look at where they are today, they are up. But if you look at something like ProShares, that is up about– down about, what, 40% from the high we saw–

AKIKO FUJITA: Year to date, but I’m thinking about year on year. Where– because if you think about where Bitcoin was trading, we saw the high in November of last year. Everything has kind of been downhill and a bit choppy since. So, obviously, those ETFs trading in tandem with that as well.

BRIAN CHEUNG: And, you know, I mean, there was a time where, before, we were talking about Elon Musk and Twitter every day. I mean, this was the hottest thing.

AKIKO FUJITA: We’re still in that time, by the way.

BRIAN CHEUNG: No, but I mean–

AKIKO FUJITA: We’re not talking about it today.

BRIAN CHEUNG: Look, I’m a financial markets nerd, and I loved it when everyone cared about ETFs because it got a lot of people interested in finding out how do these exchange traded funds get put together. And, you know, when the ProShares product, which was the first one to come out, again, Bitcoin spot ETF, you had a lot of optimism that you know what was the next thing? Bitcoin spot ETF, right, as opposed to the futures, which is what the ProShares ETF is.

So, obviously, the SEC has been kind of waffling on that topic. Gary Gensler kind of punting every time he’s asked about it, about a possible ETF peg to the actual physical Bitcoin itself is going to come along. Look, we haven’t gotten any sort of commentary that suggests it’s going to come soon. But, you know, when you saw that rip higher last year, that was probably the reason why. But look, since that point in time, the SEC said nothing about that problem.

AKIKO FUJITA: Well, and also if you think about not necessarily a diversion, but the fact that the crypto assets themselves are outperforming those companies that have exposure to it, a lot of people saying when’s the ETF going to come down, the spot ETF, when is that going to come down.